Play and altruism have a serious impact on happiness. My yo 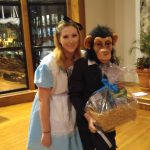 ung friend Julia, a Clark University student, hosted a Comic-Con event http://bit.ly/1QScaBF for clients of a facility that provides services for disabled people. In case you did not know, as I did not, this international comic convention started in the seventies and now also includes other aspects of popular arts. Noting that many clients enjoy Disney films, Julia thought to host Comic-Con masquerade party. As she had a zero budget, the event was funded via loans, donations and enthusiasm. About 350 people including clients, staff and students, appeared in costume, university artists performed, face painting was provided and a photo booth with instants was available. Julia’s Dad Stephen, who attended, noted a palpable happiness in the room. The whole night was, “Just for fun.” I thought about the profound impact that play/fun has on the mind.

“Just for fun,” is important for mental health. Spontaneous, rather than goal directed activity elevates mind, mood and creativity. Playful moments have a positive impact on the brain. Dr. Rex Jung http://bit.ly/1Zd4uzX , a creativity researcher, writes about the value of the meandering mind (one version of play) for brain development. Whether it is laughter, human interaction, spontaneous thought or the imagination and effort involved in coming as your favorite character, frivolity has some serious benefits.

In addition, all the donations, from money to volunteering, likely played a part in the positive vibe. Altruism is considered a psychologically healthy defense and has been scientifically shown to be a source of happiness. According to Dr. Mark Hyman, it has the same impact on the brain as sugar! http://bit.ly/1YM2RKg

Sign up for Dr. Carrie Barron’s email newsletter and receive the free white paper Twelve Things You Can do to Elevate Your Mood.